Is the IELTS Easy? 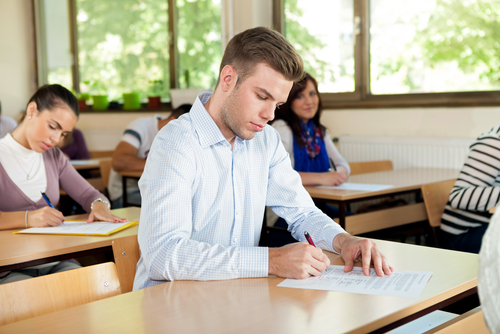 Is the IELTS easy? This is a question students are sometimes afraid to ask. But there’s no shame in hoping a test is easy.

So… is the IELTS easy? It’s hard to tell just by asking someone. Some test-takers will tell you the IELTS was very easy for them. Others will say that the IELTS was incredibly hard. Exactly how easy will the IELTS be for you? That depends a lot on your own abilities.

Is the IELTS Easy If you Are Very Familiar with British English? It Just Might Be

The IELTS prides itself on being a test of global English, but there’s no denying it: standard British English really dominates the exam. Most of the passages in IELTS Reading are written in British English. And when it comes to IELTS Listening accents, any audio track will have at least one British speaker on it.

So yes, if you are very comfortable with British English, the IELTS may come easier to you, especially in comparison with an English exam that’s more focused on some other English standard, such as Indian, Australian, or North American English.

The IELTS Will Also be Easy if You’re Comfortable with Graphs, Charts, and Tables

The IELTS is all about visual literacy, the ability to read graphs, charts, and tables. Provided you’re comfortable with reading visual information, this aspect of IELTS may be easy for you. (IELTS Reading, Listening, and Writing all provide visual support for the English you read, hear, and write.)

Are Traditional Paper-Based Tests Easier For You?

We live in a golden age of computer-based testing. Nowadays, most standardized tests are taken on a computer. Still, many test-takers are more comfortable writing down answers with good old-fashioned pencil and paper. Studies have shown that quite a few learners find it easier to concentrate and give correct responses when they do so completely by hand.

If you’re among the many people who does better with paper-based testing, you’re in luck. The IELTS is almost never given on computer. If paper and pencil are your easiest testing tools, then you may find the IELTS easier than other tests.

Is the IELTS Easier than the TOEFL?

Now, there’s the big question! So many schools in the USA, UK, and elsewhere give international students a choice between the IELTS or TOEFL. (And in North America, many states and provinces also allow medical professionals to take either IELTS or TOEFL.)

So which is easier? This is heavily debated among test-takers. Again, the answer depends on your own abilities and preferences. To figure out if the IELTS is easy compared to the TOEFL (for you), go to the Magoosh TOEFL Blog and check out Kate’s direct comparison of IELTS vs. TOEFL.
Source:https://magoosh.com/ielts/is-the-ielts-easy/